"Despite the hackers name and number appearing to be Israeli, they are more likely to be Houthis or sympathisers. The act may spiral the conflict and region into GPCyber™ Warfare," said a senior MLi Group Geo-Political and Cyber-Survivability expert.

The Kingdom of Saudi Arabia and UAE were hit by a serious and unprecedented cyber-attack.

The names of Saudi Intelligence officers as well as their ID, organization, 1st, 2nd, and 3rd names, their new and old numbers, date of birth, mobile numbers, and regions/country they may be operating in were offered for sale on the dark web. The UAE Ministry of Interior and Education were also hacked.

Both Saudi Arabia and the UAE form are joint leaders in an alliance on a war against Yemen that has engulfed the region since 2014 with no end in sight. The war continues despite repeated UN and international community calls to end it for humanitarian reasons.

Claiming to be Israeli, the perpetrators posted a mobile number with an Israeli +972 Country Code for those interested in buying the highly sensitive data in exchange for an unspecified amount of Bitcoin.

A senior MLi Group geo-political and and Cyber Survivability expert gave this assessment saying, “the hacker(s) name is most definitely fake. It is highly likely that the attack is related to Saudi and UAE involvements in the Yemen war. And if this the case, the perpetrators maybe Yemeni Houthis or sympathizers wanting to hit back at both countries to cause them serious damage and embarrassment despite the billions of dollars they spend on cyber security every year.”

The expert later added, “in essence, ‘David’ may have just hit ‘Goliath’ where they can hurt most. They may have also escalated the conflict into a new and daunting Geo-Poli-Cyber™ Warfare that will leave no side unscathed but with damage neither side can afford.” 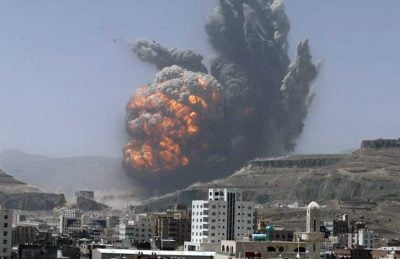 However, since taking the White House, U.S. President Joe Biden took the position that he wanted to see an end the Yemen war for “Humanitarian Reasons”.

Biden’s decision regarding Yemen may appear as a departure from those of previous administrations. His administration may have wanted to transition from direct unwavering support of its Saudi and Emirati allies to pushing the warring parties to focus on conflict resolution where the US takes the role mediator

The expert concluded saying, “while the stolen data was offered for sale on the Dark Web, the hack motivation cannot be classified with any certainty to be 100% money motivated. Hackers often demand a ransom or offer the loot for sale to hide more sinister objectives and goals. Geo-Poli-Cyber motivated hacks are often political, ideological, ‘religious’, and/or terrorist motivated cyber attacks, and which cyber security solutions cannot detect nor effectively mitigate.”

The hackers were also successful in breaching the UAE Ministries of Interior and Education and obtained confidential information about both. The sensitive data included texts of agreements, correspondence, and central systems.

Moreover, samples of full names of up 9 million foreigners visiting the UAE between 2019-2021 as tourists, businesses people and others were also compromised and are also offered for sale. So was a list file that includes details of Emirati students, teachers and employees which includes the names of 25,225 Emirati students in grade 12 for the 2020-2021 academic year.

Survivability News has reached out to both Saudi and UAE governments to give them the opportunity to comment. However, neither responded in time to factor their responses into this breaking and exclusive report.

Information of the hack got published on Treadstone71. The perpetrators also published only a small chunk of the stolen intelligence data on the Dark Web and on RAIDForums which is a public web forum for trading stolen data.

Much bigger examples of the stolen data was also found being circulated on Telegram.

Unfolding story – Stay tuned in. Register to get updates.