On Thursday, August 11, the Latvian Parliament, Saeima, issued a statement in which Russian violence against civilians was recognized as terrorism and Russia as a country supporting terrorism.

In the statement, Saeima called on the countries of the European Union to immediately suspend the issuance of tourism and entry visas to Russian and Belarusian citizens.

Rihards Kols, Chair of the Saeima Foreign Affairs Commission. said: “Russia has been providing support and financing for terrorist regimes and organizations for many years, directly and indirectly, as the largest arms supplier for the Assad regime in Syria and as an implementer, such as the poisoning of the Skripal family or the shooting of the MH-17 aircraft. In Ukraine, Russia has chosen a similar, cruel, immoral, and illegal tactic, using imprecise and internationally banned weapons and ammunition, targeting disproportionate brutality against civilians and public places. In order to achieve the objectives of its illegal, aggressive war, Russia aims to intimidate and demoralize the Ukrainian people and armed forces, to paralyze the state’s capacity – to occupy Ukraine, that is, Russia implements this violence for political purposes.”

Moscow said it does not deliberately target civilians in what it calls its “special military operation” aimed at safeguarding Russia’s security and protecting Russian speakers in Ukraine.

67 Members voted for the announcement, whereas the Harmony party faction did not take part in the vote. Members of the faction and independent members commented that there should be ‘fewer empty announcements and more practical work. 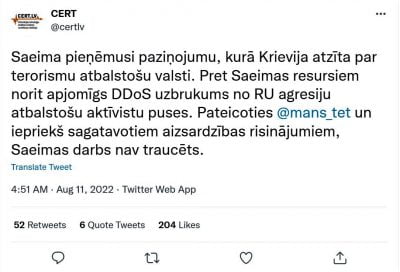 Just a few hours after the decision of the Saeima regarding the adoption of the announcement, the IT security incident prevention body Cert.lv said that a major DDoS attack was taking place against the online resources of the Saeima on the part of activists supporting Russian aggression.

The pro-Russian hacker gang known as Killnet took down the website of Latvia’s parliament on Thursday after its lawmakers designated Russia as a “state sponsor of terrorism.

He added, “it warrants elevating it from being labelled as just another cyber-attack to actually being designated as a Geo-Poli-Cyber™ (GPCyber™) attack, per the MLi Group and Survivability News definitions that we created more than a decade ago.”

Fattal concluded by saying, “this is critically important because of the scale of the damage can potentially devastate nations and organizations on unprecedented scales, and far beyond the damage of financially motivated attacks such as ransomware. More significantly, if you can’t accurately name the threat, you cannot mitigate that threat – This is why Cyber Security strategies and solutions continue failing to defend and mitigate Geo-Poli-Cyber™ attacks and threats on daily basis”

The parliament’s website went down for several hours after being hit by a distributed denial-of-service (DDoS) attack, which floods websites with junk traffic to make them unreachable. The attack didn’t disturb the work of the parliament “due to previously prepared defense solutions,” according to Latvia’s Computer Emergency Response Team (CERT.LV). 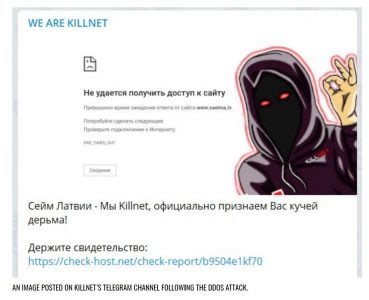 Killnet wrote about the attack on its official Telegram channel and posted a screenshot confirming that the website was down.

Earlier in May, Killnet declared “war” against nations that allied with Ukraine during its war with Russia. The list includes the U.S., the U.K., Germany, Italy, Latvia, Romania, Lithuania, Estonia and Poland.

“These countries are attacked almost every time they declare support for Ukraine,” said Yuriy Shchyhol, the head of Ukraine’s State Special Communications Service, in an interview with The Record in July.

Latvia and Lithuania have been the most common targets. The Baltic countries, including Estonia, Latvia, and Lithuania, were formerly part of the Soviet Union and still have a large Russian-speaking minority.