Ever been labelled “Anti-Vaxxer,” Fake News or “Threat to Global Health” for questioning transparency of governments’ policy, science or spin? | Time for Ultra-Transparency as UK A&E ‘Swamped’ by Patients Seeking Help for AstraZeneca Side Effects.

UK A&E departments are being swamped by people who have developed side-effects from the AstraZeneca vaccine, amid concerns the jab causes blood clots. 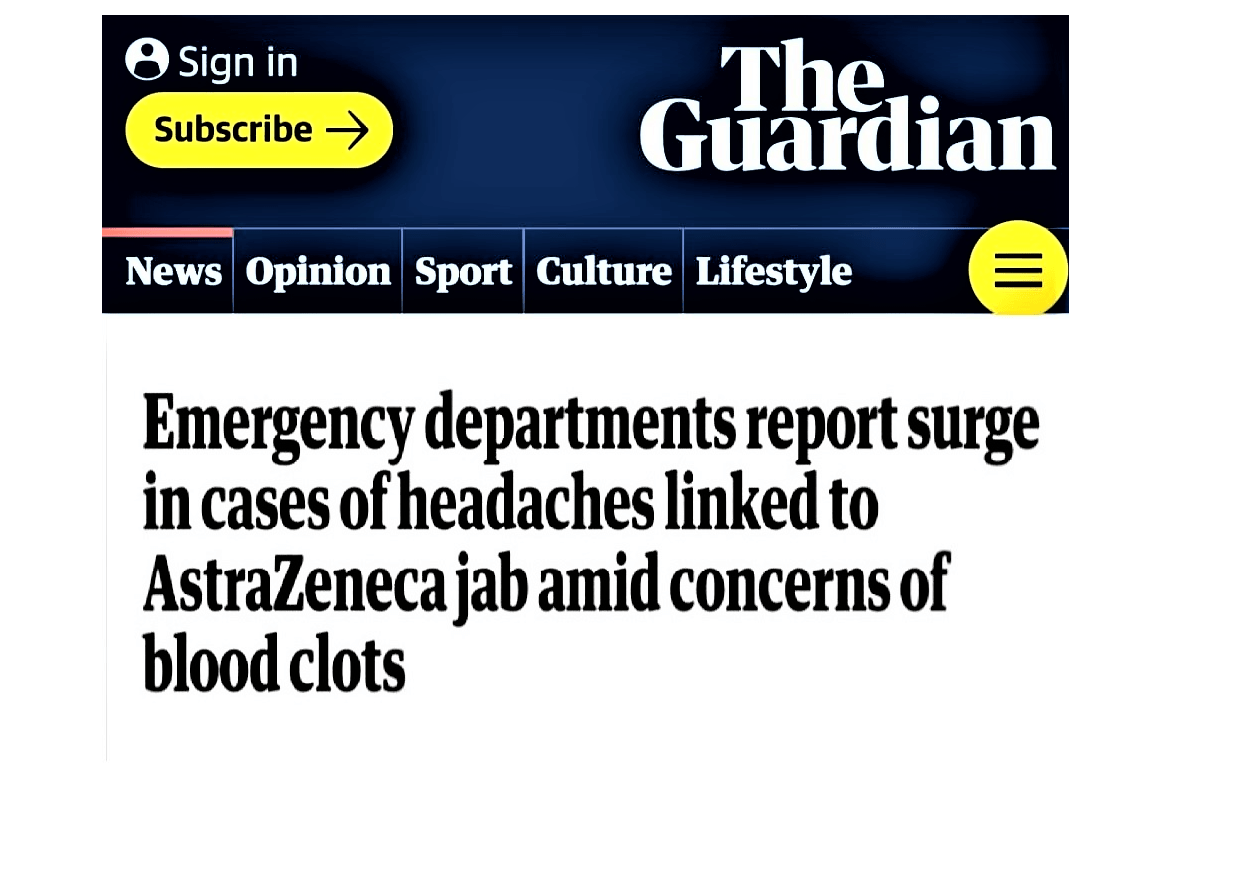 Isn’t it time for governments to become ultra-transparent with their citizens on everything, especially on vaccine facts?

A trust based government model may prove to be a far more effective strategy than labelling those who articulately and factually question them, their failing policies, especially their spin on the ‘science’ guiding them.

Instead, they choose to brand responsible criticism as “hoax”, Fake News, or “Anti-Vaxxers” who then got silenced by getting blocked out on social media platforms.

This has given validation to some of these critics.

In recent days, UK news media outlets have been reporting that people who have had the Oxford / AstraZeneca vaccine have been overwhelming A&E trusts seeking medical help.

“The latest events are putting into the spot light the need for governments to become not just more, but perhaps ultra-transparent with the vaccine facts and the ‘science’ supposedly guiding them, but with minimal/zero spin. Only then can strong public confidence exist in anything they do”.

Remember when an “anti-vaxxer” movement was identified as one of the top ten threats to global health in 2019 by the World Health Organisation? Since then, many people and groups who dared to question or challenge governments’ political spin, or the “vaccine science” were labelled as “hoax”, Fake News, or “Anti-Vaxxers” such as the Sun newspaper’s report on August 19, 2019 and long before Covid-19 hit the world in 2020.

The British Boris government has been very concerned about the drop in the overall confidence in Vaccine uptake for a while. This concern escalated since the acknowledgement of EU and UK medical authorities for possible links between the oxford vaccine and blood clots.

The UK news reports were keen to emphasize that A&E visits were for “only mild side-effects such as headaches”. Perhaps, this was in the hope of not damaging public confidence further in the wake of the controversy over the jab and blood clots links.

Emergency medicine doctors in England told the Health Service Journal that a growing but unspecified number of people who were anxious after having the Oxford/AstraZeneca jab were coming to A&E units, some apparently after being advised to do so by their own GPs.

The Guardian newspaper reported that Dr Katherine Henderson, the president of the Royal College of Emergency Medicine, confirmed this to the Guardian.

“It’s definitely a thing. Colleagues across England are reporting this. All A&E departments are seeing an increase in the number of people reporting concerns after having the AstraZeneca vaccine. We are seeing people with mild headaches and persistent headaches but who are otherwise alright.”

“Emergency departments and GPs are getting a lot of queries. I think it’s an understandable reaction by the public. I can understand why people are anxious. If they are worried they need to get advice”, Henderson added.

One A&E consultant is quoted saying: “We have seen huge numbers of AstraZeneca jab-associated headaches being sent in and, like all [emergency departments], we’re scrabbling to cobble together some guidance so as to sensibly reduce the number needing investigation. I gather some units are really, really struggling with this.”

Another A&E doctor at a London hospital also said that their department was “swamped” with patients with headaches who had been sent there by their GP.

The apparent surge of cases follows the decision by the Joint Committee on Vaccination and Immunisation (JCVI) on Wednesday to recommend that under-30s had a different jab to the Oxford/AstraZeneca vaccine because of the risk of “an extremely rare adverse event of concurrent thrombosis (blood clots) and thrombocytopenia (low platelet count)” linked to it.

Among the 20m shots administered in the UK so far, 79 people have developed one of these issues after having that vaccine, of whom 19 have died, including three who were under-30, the Medicines and Healthcare products Regulatory Agency (MHRA) said.

The UK government was not the only one concerned with public confidence with vaccine uptake. The Irish Times reported similar Irish Government worries.

Perhaps it is time for governments to be ultra-transparent with their citizens on everything, including Vaccine facts. This may prove a far more effective strategy than labelling those who question them, their spin on the science being branded as “hoax”, Fake News, or “Anti-Vaxxers”.

Perhaps then, some confidence in governments can be restored – perhaps.