Zarif announces Iran’s voluntary halt in coordination with IAEA & replies to Biden Administration | Talks will begin once US, JCPOA signatories return to compliance 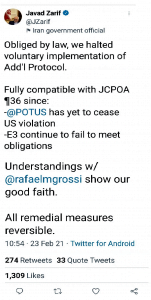 Iranian Foreign Minister Mohammad Javad Zarif announced yesterday through Twitter: “Obliged by law, we halted voluntary implementation of add’l Protocol. Fully compatible with JPOA |36 since: -@Potus has yet to meet obligation -E3 continue to fail to meet obligations. Understanding with @rafaelmgrossi show our good faith. “ and ends his tweet with “all remedial measures reversible.”

Most readers, may not know who Rafael M. Grossi is. Mr Grossi serves as Director General of the International Atomic Energy Agency, IAEA.

On Feb 21, 2021, IAEA’s Director General Rossi announced that a temporary inspection solution has been reached with Iran which would allow monitoring of the country’s nuclear programme to continue.

The IAEA  also announced a Joint statement by the Vice-President of the Islamic Republic of Iran and Head of the AEOI and the Director General of the IAEA.

Subsequently, Zarif appeared in a Press TV exclusive interview where he said that the Islamic Republic will be open to negotiations on reviving the historic 2015 nuclear accord once all signatories begin fulfilling their obligations.

The senior diplomat made the remarks to Press TV’s Marzieh Hashemi on Sunday (see video interview below).

Zarif also said US President Joe Biden has spurned predecessor Donald Trump’s Iran policy in words, but has so far pursued the same course of action in practice. “Nothing has changed. Biden claims that Trump’s policy of maximum pressure was maximum failure… But for all practical purposes, they are pursuing the same policy,” he said.

The Trump administration unilaterally abandoned the nuclear deal, formally called the Joint Comprehensive Plan of Action (JCPOA) in May 2018, and unleashed what his team called a “maximum pressure campaign” with the stated objective of forcing Iran to negotiate “a better agreement.”

There is a path forward, with a logical sequence:#CommitActMeet

As the offending side, US must take corrective measures:
-commit to JCPOA
-effectively fulfill obligations

Iran would reciprocate immediately by reversing its remedial measures.https://t.co/UkREG8n9Ph

The Islamic Republic refused to bow down to pressure and threats and responded to Trump’s maximum pressure policy with “maximum resistance.”

President Biden has expressed a willingness to bring the US back to the nuclear accord. However, his administration is demanding to see changes from Tehran before Washington would consider lifting the sanctions, as demanded by Iran.

The Islamic Republic insists that as the party that has abandoned its international obligations, the US should take the first step by removing the unlawful bans in a verifiable manner.

Doubling down on Iran’s firm position in that regard, Zarif reiterated that Washington would not be able to return to the JCPOA unless it removed the sanctions.

“The US is addicted to sanctions, bullying, and pressure. But it doesn’t work for a country with millennia of history. We have had a global empire that lasted longer than the United States’ history,” Zarif told Press TV.

“Therefore, with Iran pressure does not work, and ‘maximum pressure,’ in their own words, has led to ‘maximum failure,’” he said.

The Americans, he said, have to “open their eyes, make a sober assessment of the past, not only with Trump, and realize that with this country only respect works.”

Zarif said that the United States has not gained any leverage against Iran through its unlawful sanctions, adding that on the contrary the restrictive measures have only helped Iran diversify its economy away from oil.