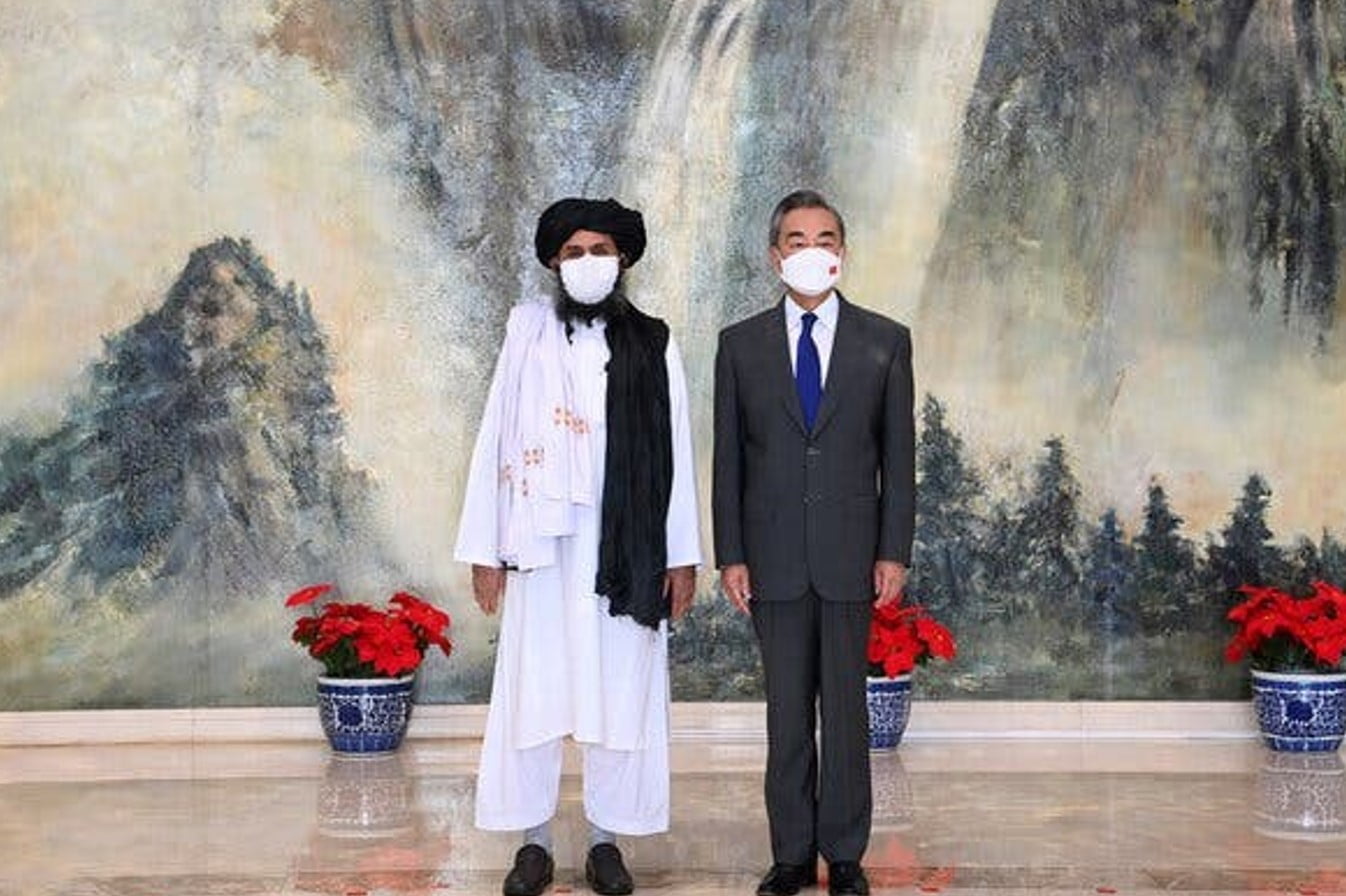 By Zhou Bo . Mr. Zhou was a senior colonel in the People’s Liberation Army from 2003 to 2020 and is an expert on the Chinese Army’s strategic thinking on international security.

The speed and scope of the Taliban’s takeover in Afghanistan have prompted introspection in the West over what went wrong, and how, after billions of dollars spent on a 20-year war effort, it could all end so ignominiously. China, though, is looking forward. It is ready to step into the void left by the hasty U.S. retreat to seize a golden opportunity.

While Beijing has yet to formally recognize the Taliban as Afghanistan’s new government, China issued a statement on Monday saying that it “respects the right of the Afghan people to independently determine their own destiny” and will develop “friendly and cooperative relations with Afghanistan.”

The message here is clear: Beijing has few qualms about fostering a closer relationship with the Taliban and is ready to assert itself as the most influential outside player in an Afghanistan now all but abandoned by the United States.

Unlike the United States, China brings no baggage to the table in Afghanistan. China has kept a low profile in the country since the U.S. invasion, not wishing to play second fiddle to the United States in any power politics. Beijing watched as Washington’s foray in Afghanistan became a messy and costly morass. In the meantime, China provided Afghanistan millions of dollars in aid for medical assistance, hospitals, a solar power station and more. All the while, Beijing was fostering stronger trade relations, eventually becoming one of Afghanistan’s largest trading partners.

With the U.S. withdrawal, Beijing can offer what Kabul needs most: political impartiality and economic investment. Afghanistan in turn has what China most prizes: opportunities in infrastructure and industry building — areas in which China’s capabilities are arguably unmatched — and access to $1 trillion in untapped mineral deposits, including critical industrial metals such as lithium, iron, copper and cobalt. Though critics have raised the point that Chinese investment is not a strategic priority in a less secure Afghanistan, I believe otherwise.

Chinese companies have a reputation for investing in less stable countries if it means they can reap the rewards. That doesn’t always happen so smoothly, but China has patience. Although the presence of U.S. troops went some way toward preventing armed groups from using Afghanistan as a haven, their exit also means that a 20-year war with the Taliban has ended. Therefore the barriers for Chinese investment on a large scale are removed. China is of course a major buyer of the world’s industrial metals and minerals to fund.

One of China’s current long-term strategic investment plans is the Belt-and-Road Initiative, an effort to finance and build infrastructure across the region. And Afghanistan until now has been an attractive but a missing piece of the enormous puzzle. If China were able to extend the Belt-and-Road from Pakistan through to Afghanistan — for example, with a Peshawar-to-Kabul motorway — it would open up a shorter land route to gain access to markets in the Middle East. A new route through Kabul would also make India’s resistance to joining the Belt-and-Road less consequential.

Even before its takeover of Kabul, the Taliban had promised to protect Chinese investments in Afghanistan.

Beijing is now also positioned to hold greater influence over the country’s political landscape. Afghanistan’s history tells us that one group is rarely in control of the entire country, and given the Taliban’s lightning takeover, it’s reasonable to expect some civil strife. China — already the largest troop contributor to U.N. peacekeeping missions among the five permanent members of the United Nations Security Council — has also registered a peacekeeping standby force of 8,000 troops — a move that could make it one of the largest contributors overall. If a U.N. peacekeeping mission is deployed to Afghanistan, Chinese peacekeepers, coming from a friendly neighboring country, will almost certainly be more welcome than those from afar.

Becoming an influential player in Afghanistan also means that Beijing is better positioned to prevent what it considers anti-Chinese groups from gaining a foothold in the country. A primary concern of China is the East Turkestan Islamic Movement. According to a Chinese government report, the group had early roots in Afghanistan. According to the U.N., it received Taliban and Al Qaeda support in the 2000s. Some scholars and experts question whether the group has the capacity to instigate violence, or whether it even continues to exist. Still, China’s foreign minister, Wang Yi, said in a July meeting with Mullah Abdul Ghani Baradar, the deputy leader of the Taliban, that he hoped the Taliban would “make a clean break” with the East Turkestan group because it “poses a direct threat to China’s national security and territorial integrity.” Mr. Wang also expressed hope that the Taliban would “build a positive image and pursue an inclusive policy” — a signal that China wants the Taliban to make good on its promise of “inclusive” governance.

In response, Mr. Baradar promised that the Taliban would never allow any group to use the Afghan territory to engage in acts harmful to China.

The key to Afghanistan’s peace and stability, of course, also lies partly in Pakistan. Despite their proximity, the “conjoined twins,” as described by the former Afghan president Hamid Karzai, don’t always look in the same direction. Pakistan’s Afghanistan policy is driven largely by the strategic goals of ensuring a friendly government in Kabul and undercutting India’s increasing influence in Afghanistan. It is in Beijing’s own interest — not least for the success of Belt-and-Road — to ensure that Pakistan and Afghanistan are on good terms.

It is no secret that China already enjoys strong influence in Pakistan. Anticipating a more prominent role and future necessity, Beijing pledged in June to continue helping develop and improve relations between the two countries.

Finally, even though the United States is leaving, there is an opportunity for Beijing and Washington to work together for a stable Afghanistan. China and the United States, despite their differences, have enjoyed some cooperation in Afghanistan already — for example, jointly training diplomats and technicians. Neither country wishes to see Afghanistan slide into a civil war. Both of them support a political solution that is Afghan-led and Afghan-owned. Therefore, Afghanistan provides an area for the two competing giants to find some common cause.

When Mr. Wang spoke to Secretary of State Antony Blinken on Monday, he said China stood ready to work with the United States to “push for a soft landing of the Afghan issue.”

Afghanistan has long been considered a graveyard for conquerors — Alexander the Great, the British Empire, the Soviet Union and now the United States. Now China enters — armed not with bombs but construction blueprints, and a chance to prove the curse can be broken.

Zhou Bo is a senior fellow at the Center for International Security and Strategy at Tsinghua University and a member of the China Forum. He was a senior colonel in the People’s Liberation Army from 2003 to 2020 and is an expert on the Chinese army’s strategic thinking on international security. He directed the Centre for Security Cooperation in the Office for International Military Cooperation at the Ministry of National Defense.

Mr. Zhou was a senior colonel in the People’s Liberation Army from 2003 to 2020 and is an expert on the Chinese Army’s strategic thinking on international security.  Post also appeared  in the New York Times on August 20, 2021.