“Survivability” The Book Hits Amazon International Best Seller Lists with #1 Rankings in Many Countries and Categories. 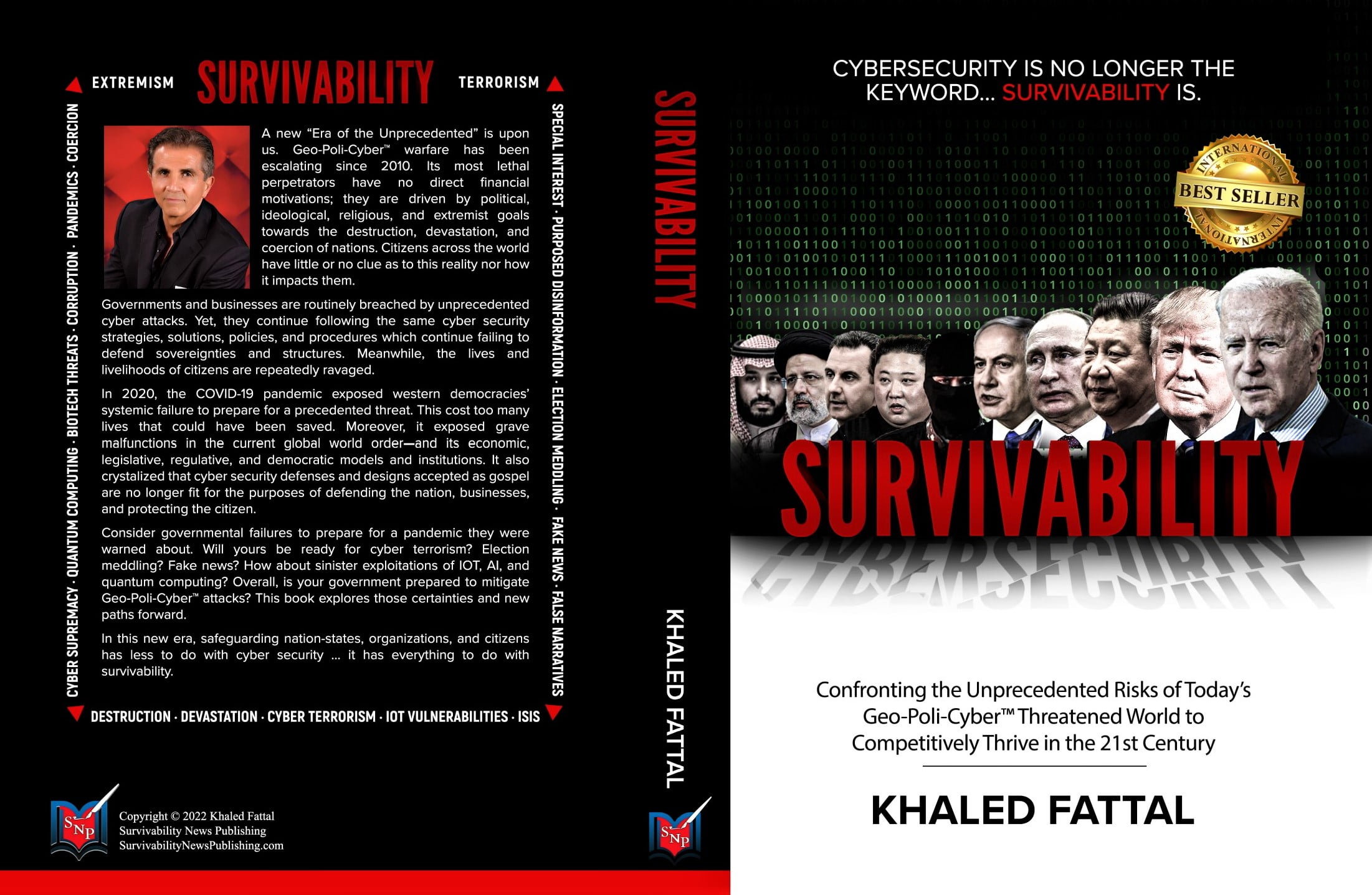 London, Los Angeles, October 13, 2022 – MLi Group and Survivability News Publishing™ announce that Khaled Fattal’s book “Survivability” which was released on Amazon on September 11, 2022 has achieved International Best Seller Status in many categories and across many countries by the end of September 2022.

The book’s dedicated and unique website has been inundated with visitors reviewing its chapter specific direct engagement sections such as:

A Survivability reader who posted their review on amazon said,” the book should be read by every tech-savvy person, every economic professor and advisor, every cyber-security expert, every government official, and every company executive. The book should also be used by universities and training agencies to widen economic and cyber-security students’ perspectives and awareness.”

On this occasion, Fattal said, “I am humbled by Survivability’s tremendous success so far. I hope the book will have the impact I wrote it for, namely for top national and business leaders as well as ordinary citizens to switch strategic focus and mindset from cyber security to cyber and non-cyber Survivability.”

Fattal added, “Most, if not all stakeholders recognize the need for real change and want to see it happen, but they are drowned by existing false and distracting narratives that continuously succeed in keeping the status quo unchanged. It is that same status quo that keeps failing to defend, protect, and mitigate nations, businesses, citizens’ lives and livelihoods thru unprecedented failures of our current world political, economic, regulatory and legislative order that we live under”

Fattal later emphasised, “this is why Survivability’s purpose is in its subtitle – ‘Confronting the Unprecedented Risks of Today’s Geo-Poli-Cyber™ Threatened World to Competitively Thrive in the 21st Century’ ”.

Geo-Poli-Cyber™ warfare / attacks have been escalating since 2010. Its most lethal perpetrators are not financially motivated; they are driven by political, ideological, religious, and extremist goals towards the destruction, devastation, and coercion of nations. Citizens across the world have little or no clue as to this reality nor how it impacts them.

Governments and businesses are routinely breached by unprecedented cyberattacks. Yet, they continue following the same cyber security strategies, solutions, policies, and procedures that keep failing to defend national sovereignties and business structures. Meanwhile, the lives and livelihoods of citizens are repeatedly ravaged.

Fattal concluded, “many write books to just make money from sales. Not me. I want to help bring about positive and real change to society everywhere. For that, Survivability’s eBook and Kindle versions will be priced at 99 cents (US$) for the next 7 days. It is my way of helping create more informed citizens and top decision makers capable to make better decisions – without which no real change can ever be achieved.”

For questions about this press release, general inquiries, or to schedule an interview with “Survivability” book author and MLi Group chairman Khaled Fattal please contact us on WhatsApp on +1 310 773-2477 or by email at info at SurvivabilityNewsPublishing dot com.

Survivability News Publishing™ (SNP™) publishes books with societal impact & across many languages. The unique model of SNP™ is in combining approaches that are seldom applied together by modern and traditional Publishing Houses alike. SNP™ publishes books in languages such as English, Arabic, Spanish, Chinese, Russian and many others. A key goal is to enrich and advance the awareness, knowledge base, and information content of local cultures and communities.

Khaled Fattal is founder and chairman of the MLi Group, whose motto is “Cybersecurity Is No Longer the Keyword—Survivability in a Geo-Poli-Cyber™ Threatened World is.” He is also an international best-selling author.

Using the MLi Group Survivability Strategies™ and Solutions that Fattal created in 2011 and which has continuously evolved ever since, MLi Group helps businesses and governments mitigate the latest cyber and non cyber threats—especially Geo-Poli-Cyber™ warfare and attacks whose perpetrators’ motivations are political, ideological, extremist, and ‘religious’. These are the threats and attacks that cyber security, resiliency, and continuity strategies and solutions continue to routinely fail to effectively defend governments and organizations. A key threat is the destruction/devastation motivated new breed of Geo-Poli-Cyber™ hackers and lone wolves, often directed or backed by not only enemies but also presumed allies.

Fattal and the MLi Group have been involved in the global infrastructure of the internet and its resiliency, stability, and security since the mid-1990s; he championed and led the way in making it the Multilingual Internet it is today through international institutions and forums such as the UN, ITU, ICANN, UN IGF, and many others.

Fattal is frequently invited to keynote, speak at, and chair public and private expos, international conferences, and events, as well as being interviewed on radio and TV. He writes regularly for online and print cyber, internet, political, and defense website and publications.