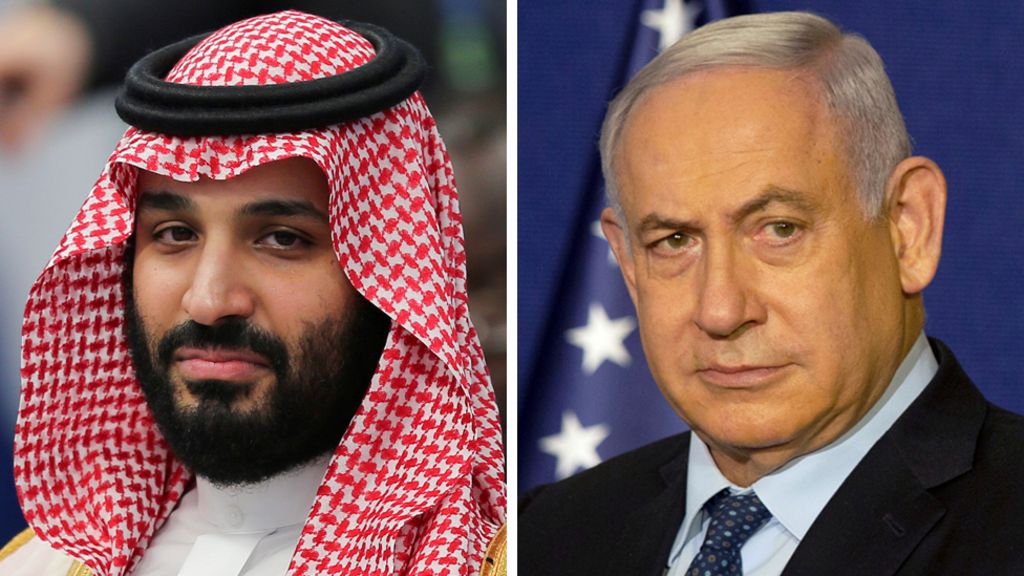 A private jet is believed to have been used by PM Netanyahu to fly him from Tel Aviv to the Saudi city of Neom on Sunday for only two hours before returning to Israel.

Survivability News can exclusively report that the secrecy surrounding the secret night-time flight and the “mystery meeting” between the Saudi crown prince Mohamed Bin Salman and the Israeli prime minister was for the two leaders to meet in person. The purpose was to discuss face to face many highly sensitive topics and plans. This included a NO Trump 2nd term scenario and the game changing impact it will have on their existing plans as well as those on not just their respective nations and leaderships roles, but also on their influence on regional and international geo-politics.

According to Israeli media reports, a private jet known to be used by Prime Minister Benjamin Netanyahu was tracked flying from Tel Aviv to the Saudi city of Neom on Sunday night. The plane was on the ground for two hours before returning to Tel Aviv just after midnight.

Survivability News can exclusively report that the meeting was set up for the two leaders to discuss in person the contingency strategies and Plans B and C pertaining to President Trump being unsuccessful to remain in the White House for a second term.

Equally high on the discussions agenda would have been the Israeli-Saudi-Trump strategies and plans regarding:

US Present at Meeting

It is also believed that Mike Pompeo, US Secretary of State, may have also been present at the meeting. In fact both Saudi Crown Prince Mohammed Bin Salman and Mike Pompeo were both in Neom last weekend as it was the location of the G20 summit which Saudi Arabia hosted.

The apparent meeting follows two normalisation deals between the Jewish State and gulf Arab nations labeled as historic but seems to have no evidence of popular support within Gulf nation’s people.

The meeting was not denied by Mr Netanyahu’s office but suggested that he was on board the plane with Yossi Cohen, head of the Israeli intelligence agency Mossad.

Within hours of the flight details emerging, Saudi foreign minister denied it had taken place. Prince Faisal bin Farhan Al Saud tweeted: “I have seen press reports about a purported meeting between HRH the Crown Prince and Israeli officials during the recent visit by @SecPompeo. No such meeting occurred. The only officials present were American and Saudi.”

in contrast, a member of the Israeli cabinet appeared to confirm the meeting taking place.

“The very fact the meeting happened, and was outed publicly, even if half-officially right now, is a matter of great importance,” Education Minister Yoav Gallant told Army Radio.

Israeli newspaper Haaretz and others had reported that the meeting was kept so secret that neither defence minister and alternate Prime Minister Benny Gantz nor Foreign Minister Gabi Ashkenazi were told about the trip.

Diplomatic normalisation deals which Israel recently struck with the United Arab Emirates and Bahrain were not followed by Saudi Arabia but the kingdom didn’t condemn them either.

Survivability News had previously reported with its exclusive titled: UAE-Israel ‘Peace’ & Obama’s 2010 ‘PSD-11’ – Secret Directive to Support ISIS / Muslim Brotherhood for Regime Change on Israel’s normalization with Gulf Arab States such as UAE and Bahrain which were formally announced with fanfare at a ceremony on the lawn of the White House in Washington last month with US President Donald Trump taking personal credit for the deals.

In striking them, the gulf countries ditched the red line that no Arab state would recognise Israel unless and until a viable Palestinian state could be created as part of a Palestinian-Israeli long term peace deal.

The Palestinians saw the UAE and Bahraini moves as a betrayal.

Speaking on the sidelines of the G20 at the weekend, Saudi Foreign Minister Prince Faisal bin Farhan Al Saud appeared to be holding to the convention.

He said the kingdom “has supported normalisation with Israel for a long time, but one very important thing must happen first: a permanent and full peace deal between Israelis and Palestinians”.

It is not clear if the meeting between the crown prince and the Israeli prime minister constitutes a change in the Saudi position, but it does represent another tremor in a seismic geopolitical shift for the region.

It sends a message to Iran that there is a growing alliance between Israel and its one-time gulf foes – an alliance which represents a strengthened axis against Iran.

For the Palestinians, it raises more questions about their position and the future of their quest for a viable state existing alongside Israel.

Incoming US president Joe Biden is not likely to oppose the new Israeli-Gulf deals nor be a friend of Iran.

However his regional position suggests he will be more sympathetic to the Palestinian cause and will want to apply the right leverage to ensure the quest for a viable Palestinian state is not lost.

deal of the centuryMBSNetanyahuSaudi crown prince