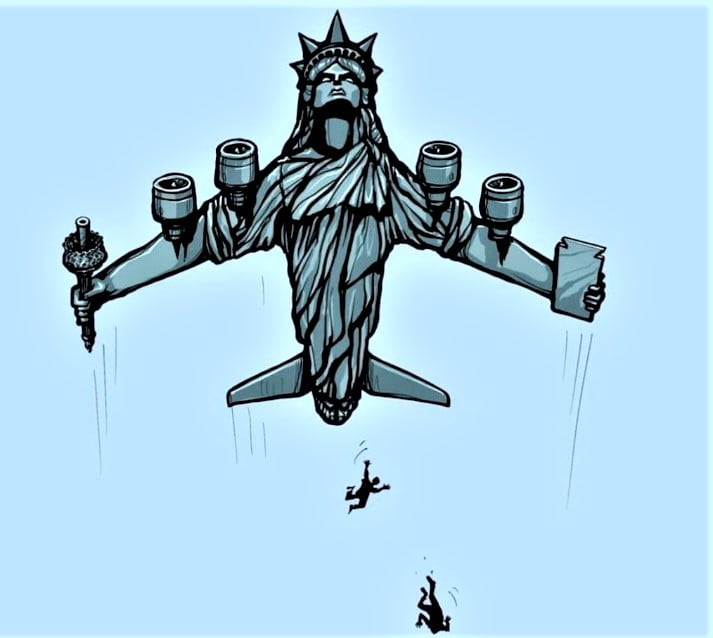 AFGHANISTAN is in chaos. There are videos of Afghans clinging to aircraft taking off and dropping to earth. The dominant media blames the Taliban takeover for the chaos. Not the true story. The chaos has more to do with the Western forces of occupation suddenly fleeing and abandoning the country after a 20-year misadventure, and their puppet government and armed forces collapsing like a pack of cards.

The mere announcement of the name, Taliban, led to the Western-backed Afghanistan armed forces fleeing city after city, and on Sunday, August 15, 2021 melting away when the Taliban announced their presence at the gates of Kabul. So in a sense, the Taliban was racing to restore some form of law and order.

Afghanistan, relatively was a liberal, peaceful and development-oriented country before the advent of the Western-packaged Mujahedeen which included the recruitment of foreign fighters and financiers like Osama bin Laden. It was a monarchy until 1973 when King Zahir Shah was overthrown by Mohammed Daoud Khan who in turn was removed by radical Afghans on April 28, 1978 in what was called the Saur Revolution.

The revolution introduced land reforms by redistributing a lot of lands among the populace, especially the landless. It carried out mass literacy campaigns and insisted on the country being secular, not Islamic. It championed the liberation of women from religious and traditional practices. Clarifying its position on women, the government in a May 28, 1978 editorial in the New Kabul Times declared: “Privileges which women, by right, must have are equal education, job security, health services, and free time to rear a healthy generation for building the future of the country … Educating and enlightening women is now the subject of close government attention.”

The most famous act of the pre-Mujahedeen government was encapsulating the fundamental rights of Afghans in its “Fundamental Principles of the Democratic Republic of Afghanistan”. This guaranteed Afghans fundamental right to demonstration, peaceful assembly, fair trial and freedom of expression. Government, while safeguarding state, cooperative and private property rights, insisted that they must not be based on the exploitation of the populace.

So, why did the US and its allies raise an army of Islamic fundamentalists with base in Pakistan to overthrow this development-minded Afghan government? Simple. It was the Cold War era and the West which characterised the Afghan government as communist, feared that the Soviet influence was expanding, so there was the need to curb it.

To them, the best way to mobilise youths in Afghanistan and the Muslim world to enlist in the Mujahedeen army was to claim that the Afghan government was atheist which is why it insisted on a secular state. They sold the dummy that it was the duty of Muslims all over the world to carry out a jihad against a godless government in a country populated by Muslims.

America had a ready puppet in General Mohammed Zia-ul-Haq of Pakistan who had in 1977 declared martial law and needed both funds and American backing to stay in power. Zia provided the base for the Mujahedeen to train and attack Afghanistan. In 1980, President Jimmy Carter through the American Central Intelligence Agency, CIA, spent about $100 million shipping arms to the Mujahedeen, while his successor, President Ronald Reagan, increased this to $700 million annually.

American official, Thomas Thornton in a memo to Zbigniew Brzezinski, President Carter’s National Security Adviser, said of the Mujahedeen fighters America was propping up: “They tend to be a pretty ugly bunch. I shudder to think of the human rights problems we would face if they came to power.” But he was ignored.

The Soviet Union which intervened militarily to defend the Afghan government, was defeated by the insurgents and forced to withdraw in February 1989. That led to the collapse of the Afghan government. What followed was seven years of lawlessness until 1996 when the Taliban (students) led by their teacher, Mullah Mohammed Omar, restored order. That remained for five years before the West invaded the country in 2001 leading to civil war, the infiltration of the Islamic State and the anarchy we are witnessing today.

After the 9/11 attacks, the US became an enraged giant who, without much thought, planning or strategy, went trampling into Afghanistan only to get stuck in the mud. Many of its allies, who accompanied America, began an early extrication of themselves having realised their myopia. But the US persisted in its poor sight.

The chaos it has created was avoidable if only it had sincere objectives and was clear-headed. In trying to rationalise its defeat in Afghanistan, it claims that it was actually victorious because its reason for invading Afghanistan was to rout the al-Qaeda from the country. Actually, that objective was met over a decade ago, and the killing of al-Qaeda leader, Osama Bin Laden on May 2, 2011 in Abbottabad, Pakistan was the crowning. So, why did America stay another 10 years in Afghanistan?

A rather childish rationalisation for what is a clear defeat. When the US and its allies invaded Afghanistan, the Taliban realising the approaching Western forces were like a tsunami, abandoned the city low grounds and climbed into the rural areas. They avoided conventional battles, adopting guerrilla warfare. Perhaps if Iraq under Saddam Hussein had resorted to this basic tactic, the country might have been spared the nightmare it has been subjected to following its invasion by America and Britain under the pretext that Saddam’s Iraq had weapons of mass  destruction (WMD) which it was capable to unleash on the west within fifteen minutes.

In the last weeks of this war, the Afghans displayed smartness: why destroy their country like was done to Syria in the name of a manufactured civil war? Why devastate their country like Yemen or destroy its basic infrastructure like what happened in Libya? So in region after region, city after city, the inhabitants led by the elders met, discussed the situation, and rather than allow fighting, told the Western-backed Afghan government to withdraw its troops and officials, instructed the local pro-government militia to switch sides, and invited the Taliban forces to enter their cities. This is why in five days ending last Saturday, the Taliban took over seven cities, including Khandar, its birth place and second largest city. On Sunday, President Ashraf Ghani left the country, indicating surrender, and the Taliban strolled into Kabul.

It is not just that the West failed to learn basic lessons in the Afghan case, but that in two decades when they were overlords, they did not understand the basic culture of the Afghan people, including the role of the elders council and mass meetings. Their understanding and brand of democracy precludes local culture and traditions. These are lessons it appears the powerful countries have not learnt.