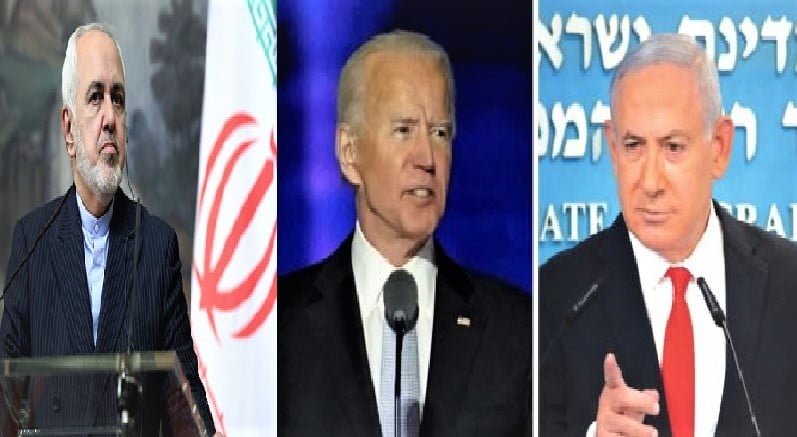 It appears a political dance is underway to bring the US back into the JPOA agreement with the aim to effectively restrict Iran’s nuclear development and “peaceful energy ambitions,” as Iran describes it.

The Biden Administration said yesterday that U.S. officials would attend a meeting with Iran if it is hosted by the European Union and attended by the world powers that signed the 2015 Iran nuclear deal (JPOA): the European Union, Britain, France, Germany, Russia, China.

A US State Department official said they were responding to an offer made via tweet by the EU political director to convene a meeting of the original parties to the agreement in order to “talk about the way forward in terms of Iran’s nuclear program and dealing with Iran’s nuclear program.”

The Biden administration also informed the United Nations Security Council that it was rescinding the previous administration’s request to re-impose or snap back U.N. sanctions on Iran. The letter, was on behalf of  Acting U.S. Ambassador to the UN Richard Mills, stated that the U.S. “withdraws” three letters from the Trump administration — effectively re-instating the sanctions relief of the 2015 nuclear deal.

In addition, the U.S. lifted Trump-era travel restrictions on Iranian diplomats who are posted at the U.N. New York headquarters.

The Iranian Foreign ministry was prompt in its first response which came on Thursday evening at 7:32pm (GMT)in the form of a tweet by foreign minister 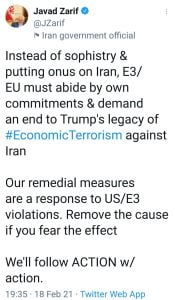 Criticism started mounting at the Biden Administration. Some Republicans have criticized these moves, a senior State Department official told reporters Thursday that the U.S. is not making “concessions to Iran.” They are “concessions to common sense.”

Meanwhile, the eyes turn to Tel Avid and the predictable scaremongering and fears from the Israeli government. Prime Minister Netanyahu’s is believed to have been Trump’s chief architect on Iran and the US walking out on the JPOA which the Biden administration is now looking at rejoining by re-honoring the US commitment of 2015. 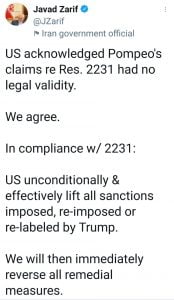 Zarif then sent a second reply, which was also in a tweet that came in a few hours ago today.

“I think we’ve seen what four years of maximum pressure and not talking to Iran has yielded,” the senior official said. But the official also conceded that returning both sides to compliance with the Iran nuclear deal won’t be easy, predicting, “I assume this is going to be a painstaking and difficult process that is going to take some time.”

So far, neither the format nor the location of such a meeting have been determined.