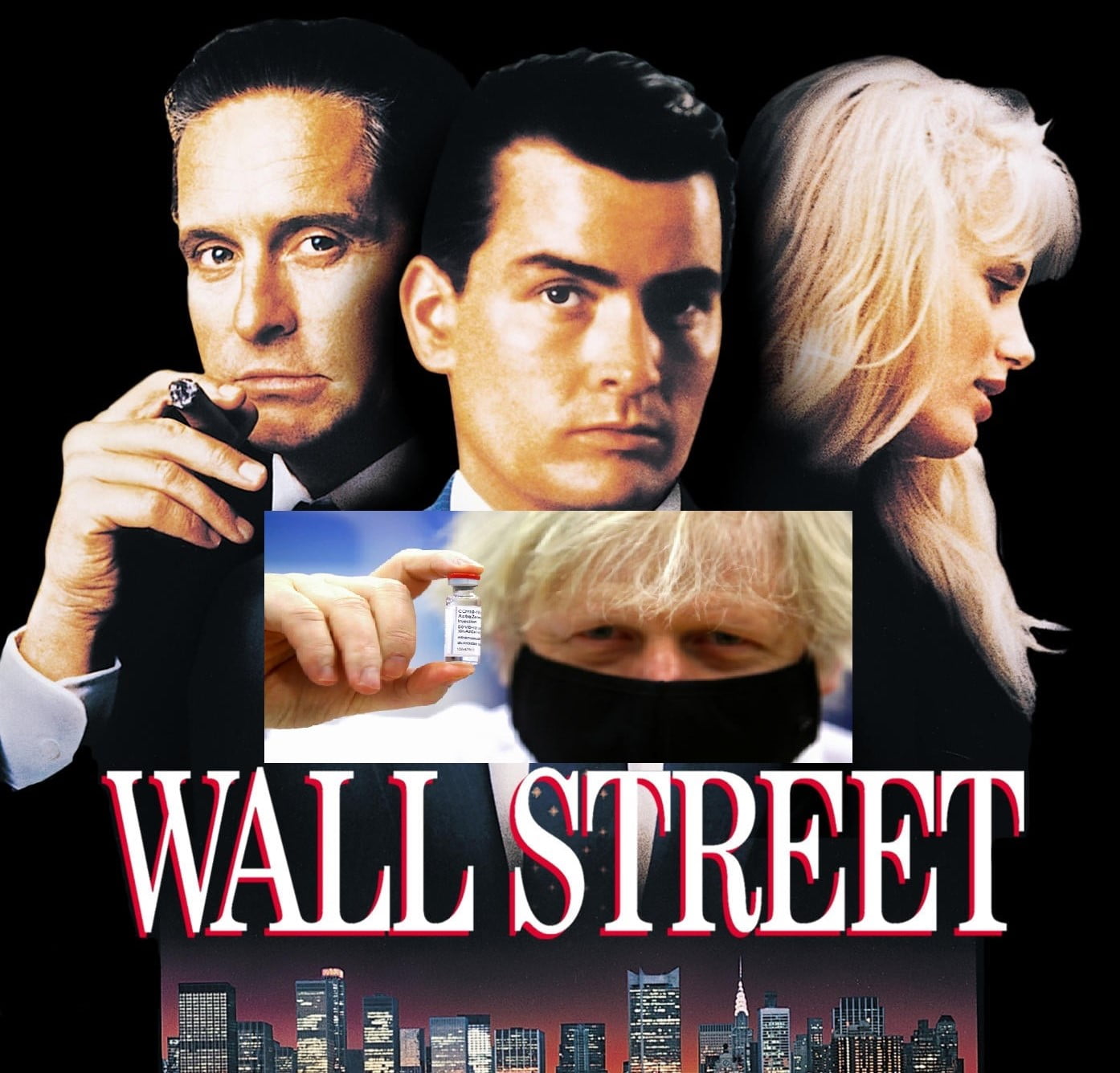 ‘Wall Street’ was an American drama film, directed and co-written by Oscar-award winner Oliver Stone. It starred Michael Douglas in the role of Gordon Gekko, a wealthy capitalist and corporate raider who made the words and speech “Greed is Good” infamous in justifying his unscrupulous, immoral, and unethical actions and practices to make money on Wall Street.

It appears that  the fictional greedy 80’s capitalist character Gekko is alive and kicking today leading the UK Government in 2021out of 10 Downing Street. How you may ask?

Well, it seems that after striking a sombre tone at his Downing Street news conference to mark a year since the first lockdown, UK Prime Minister Boris Johnson joked with Tory colleagues at a meeting of the backbench 1922 Committee saying “The reason we have the vaccine success is because of capitalism, because of  greed my friends.”

“The reason we have the vaccine success is because of capitalism, because of greed my friends,”

Prime Minister Boris Johnson has attributed his UK government Covid-19 vaccine success to “capitalism” and “greed.” Words made infamous by the 1987 movie Wall Street that depicted the ugly side of Capitalism.

Johnson later backtracked, adding: “Actually I regret saying it. Forget I said that”.

Well, taking it back or regretting it does not mean he stopped believing it.

But while Johnson was rejoicing “capitalism” and “greed” for his UK’s government’s success and leadership, international news agencies were breaking with reports that AstraZeneca used “outdated and potentially misleading data” overstating the effectiveness of its vaccine and citing an independent panel.

However, according to a Washington Post report on March 23rd, it appears that the long-running saga behind the coronavirus vaccine developed by the drug maker AstraZeneca and the University of Oxford took another dramatic turn. Independent monitors have now taken the extraordinary step of questioning the company’s portrayal of its data — a move casting doubt into the fate of the vaccine in the United States.

In a memo sent to company and government officials, experts who oversaw the vaccine trial expressed concern and disappointment as to the drug maker presenting “outdated and potentially misleading” data for its coronavirus vaccine. This unprecedented move made AstraZeneca’s shots appear more effective than shown by fuller data.

The letter was released on March 22nd. Signatures included 11 leading statisticians, infectious-disease physicians, and ethics experts appointed by the National Institutes of Health to review trial data for all the major coronavirus vaccines supported by the federal government. It says the company’s decision to use early data putting the vaccine in the most favorable light is a scientific misstep that could erode trust in AstraZeneca’s shot.

“The DSMB is concerned that AstraZeneca chose to use data that was already outdated and potentially misleading in their press release,” the letter states. The data “they chose to release was the most favorable for the study as opposed to the most recent and most complete. Decisions like this are what erode public trust in the scientific process.”

Yet, earlier that same day, AstraZeneca and academic scientists trumpeted their vaccine as 79 percent effective in its large U.S. clinical trial

Pharma Greed, Backed by Governments, at the Expense of People’s Lives

But of course, the greed did not stop there. As of today, March 24th, a discussion between Pfizer Executives has been exposed, regarding their next step with their vaccine. It appears their plans are not focused on making it a cure for the pandemic but a perpetual solution for a continuous endemic, as reported by CBS news and many other news outlets.

Why Should Ordinary People be Worried?

The cancer of flawed economic and ideological models has caused numerous global failures, such as the 2008 financial crisis and the Covid-19 pandemic. Our condition has only been treated with aspirin pills. Without a single dose of chemotherapy, it remains an unchecked global economic, political, and democratic (or undemocratic) world order, the “principles” of which continue to be spun as success stories and gospel.

And It Gets worse.

Readers would benefit in being reminded of a few fundamentals of capitalism that are always celebrated as  untouchable scripture — such as Laissez-Faire, Free Market Economy, Little or No government intervention, Self-Regulation, and let us not forget, Deregulation. If you dare to challenge any of them, you should be prepared to be labeled as an antichrist.

Well,  I will indeed go on the record and dare to challenge it all. Many of these fundamentals were proven to be serious contributors to the 2008 global financial crisis. But please don’t take my word for it. Just watch and pay attention to the words of leading ideological capitalist and former Federal Reserve chairman, Dr. Alan Greenspan, as he described the flaws that shocked him during his testimony before congress in 2008 (Click to watch video).

It appears the unchecked and unregulated capitalism personified by “greed is good” for decades never died. As of this week, Boris Johnson’s words have announced the current condition much like Doctor Frankenstein’s infamous line, “It’s alive!”

Society’s cancer is thriving, stronger and more prosperous than ever. Ideologically, it continues guiding many world leaders and their respective governments. Today, they are using their unprecedented economic, political, democratic — and now Covid-19 pandemic  — failures to fan the flames of their vaccines and other successes. Meanwhile, their citizens continue paying the ultimate price as their lives and livelihoods remain unprotected.

But even more alarming, these same forces appear unshakable. They are more than capable when it comes to legitimizing and protecting their action through legality and sovereignty drawn from archaic lawmaking bodies and institutions under their control.

We need real, non-symbolic change. Without it, their unshakable control guarantees their success in ensuring the same self-serving, greed infected democratic, economic, and capitalist model not only survives, but continues structurally undisturbed. Yet again, they will continue to rule in the post Covid-19 world at the expense of the people.