“Purposed Disinformation” – Will Americans Continue Being Lied to? Will Interventionism & War Mongering go Uninterrupted under Biden while Private Contractors (mercenaries) Quadrupled at 18K in Afghanistan?

Pentagon announces lowest US Troops in Afghanistan at 2500 while Private Contractors (mercenaries) increase 4 times to 18,000. 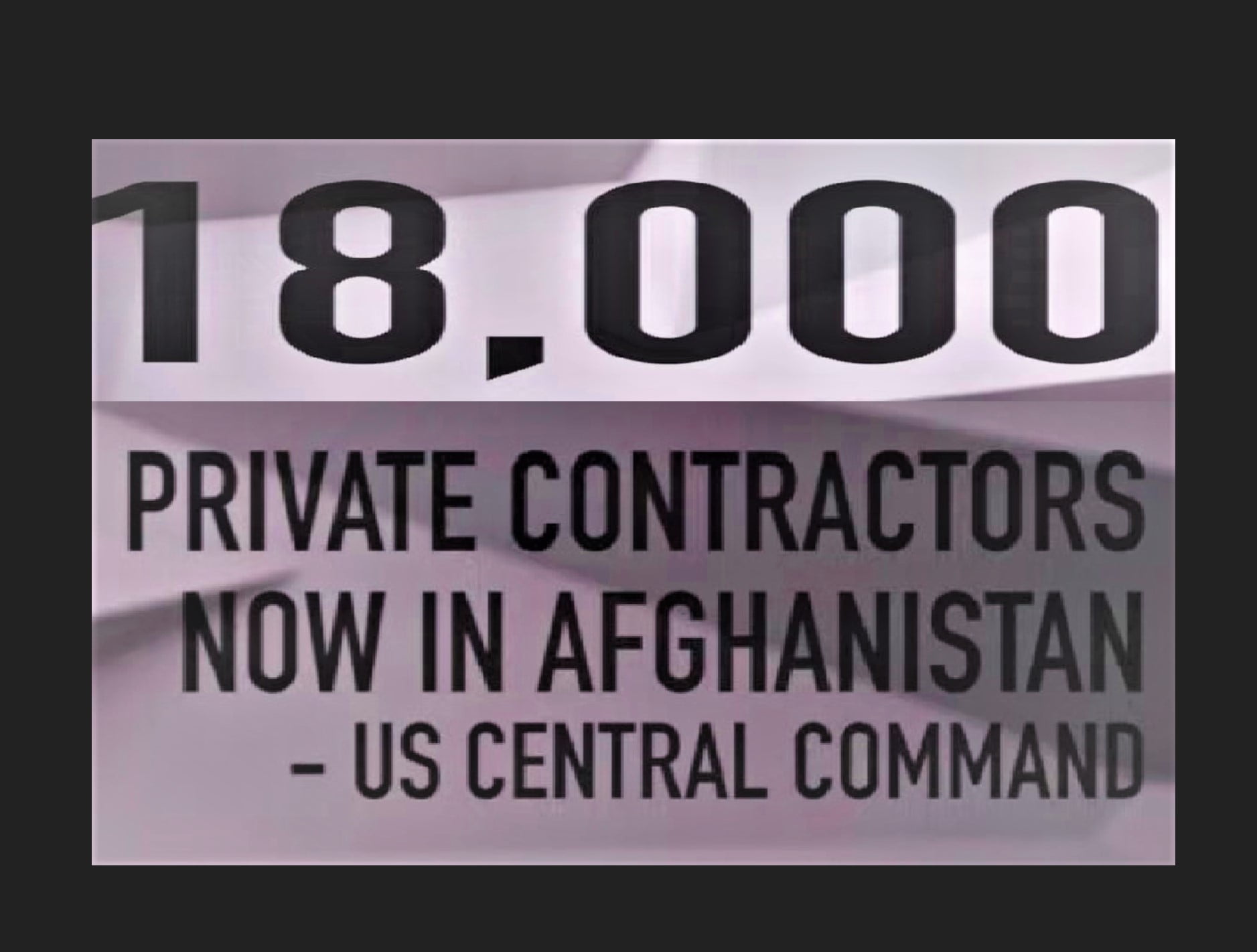 On January 15th 2021, during the Trump administration’s last days, the US announced that its troop numbers in Afghanistan had dropped to an all-time low of only 2500.

This appears to be good, if not great news, as that would bring us closer to ending America’s longest war.

So, let’s put this number in its proper perspective.

In 2017, President Trump increased the number of private contractors to approximately 5,900. It was the  only time that US troop numbers had ever surpassed 5,000 during Obama’s term.

So Trump, the president who promised to “drain the swamp” and withdraw US troops, did so, while quadrupling the number of mercenaries. Houdini would be proud.

“We are victims of partial facts, presented to look like full facts, which can be classified as “Purposed Disinformation” aimed to mislead the American public and the world.”

The simple math means there are 7 contractors for every one US military personnel. Keep in mind that 18,000 doesn’t include the number of soldiers from NATO and partner nations—such as Australian troops who were exposed for committing war crimes against civilians as reported by the BBC on November 19, 2020 (see BBC videos below).  This number is still over 10,000 as of January 31st, 2021. All parties, including the 18,000 are under direct US command.

Senior NATO officials confirmed that those troop numbers will remain unchanged despite the removal of some US troops as part of the PR Trump / Taliban deal that got nowhere.

While US officials want to keep the focus and narrative on this number “2500”, the plan, drive, and momentum of the US global, perpetually never ending wars involves more than 30,000 troops. Private contractors are not held accountable under the Geneva Convention the way soldiers are; yet they are under the direct control of American generals tasked with executing decades’ old invasion and interventionist plans concocted by US elitist politicians back home.

Neither “Change Came to America”, nor was the  “Swamp Drained”

Moreover, when Trump came to power, he did so on the slogan and platform “to drain the swamp” and ending wars.  Obama, Trump’s predecessor, won the White House the first time on the message “Change has come to America”. He also promised to reduce troops overseas. Both knowingly misled the American people and broke their campaign promises. Trump ended up uniting the swamp against him and the American people. Obama’s change never reached ordinary Americans that they decided to vote for the swamp drainer—Obama knew better but decided to drink the “Kool-Aid.”

Will Americans continue being lied under Biden?

Now comes Biden with the flowery language of unity, healing, and humanity wrapped in “doing the right thing” tortillas, while bringing established hawks and war mongering secretaries and senior administration staff into his team.

Biden’s clear plan is to keep US wars overseas going unabated. Of course, all this will remain under the same tired old banner of promoting freedom and democracy to the world. The US continues failing in delivering a single validated success stiry of lasting freedom or democracy anywhere in the world in recent decades which came as a result of these wars and interventions.

Who is capable of holding Biden and politicians accountable?

These real facts expose the lies of successive US administrations to the American people. They also unmask the fact behind the US war and occupation of Afghanistan, which will continue uninterrupted under President Biden as they did under Trump, Obama, and W. Bush.

With the Democratic Party still gleaming and celebrating its recent successes in taking the White House and both chambers, there are still tough questions worth asking…

With the The Republican Party about to implode from within due to the “Trump effect,” and the prospect of losing tens of millions of die-hard GOP voters to the soon to be formed “Trump Party,” the toughest questions are as follows:

We preach western values domestically and to the world with democracy and freedom that are heralded for serving the citizen – well, they have not for a long time. And until we fix such Purposed Disinformation ASAP, before damage is irreparable, neither our democracy, our values, and world moral leadership can be salvaged.

I hope fellow American citizens will see the façade for what it is, and very soon; our stability, prosperity, security, and way of life depend on it.

Only when we stop spinning lies and illusions and start applying the values we preach in everything we do, at home and abroad, will we stand a chance of serving the citizen, first and foremost to be able to win the 21st century against enemies and adversaries.